Official Google Blog: We knew the web was big…We’ve known it for a long time: the web is big. The first Google index in 1998 already had 26 million pages, and by 2000 the Google index reached the one billion mark. Over the last eight years, we’ve seen a lot of big numbers about how much content is really out there. Recently, even our search engineers stopped in awe about just how big the web is these days — when our systems that process links on the web to find new content hit a milestone: 1 trillion (as in 1,000,000,000,000) unique URLs on the web at once!How do we find all those pages? We start at a set of well-connected initial pages and follow each of their links to new pages. Then we follow the links on those new pages to even more pages and so on, until we have a huge list of links. In fact, we found even more than 1 trillion individual links, but not all of them lead to unique web pages. Many pages have multiple URLs with exactly the same content or URLs that are auto-generated copies of each other. Even after removing those exact duplicates, we saw a trillion unique URLs, and the number of individual web pages out there is growing by several billion pages per day. 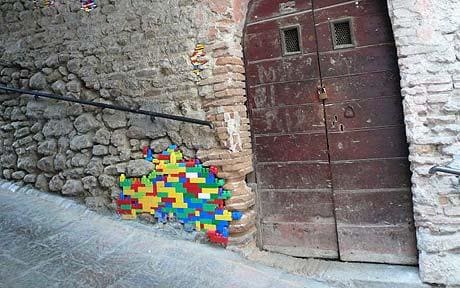 Hey! I think that piece of Legos is mine!Lego bricks used to repair crumbling walls – Telegraph

The â€œRivera Methodâ€ takes such agricultural refuse as cracked soy beans, rice and cotton seed hulls, grain sorghum, milo and jatropha and turns them into bio-crude oil. This crude â€“ or Vetroleum, as Rivera calls it – can then be further refined into everything from gasoline to jet fuel and just about every petrochemical in between.

With this process, just one bushel (60 pounds) of organic waste can yield about six gallons of bio-crude, Rivera said.

â€œOur biggest problem is that we are too good to be true,â€ Rivera said. â€œWe can literally replace every gallon of gasoline, diesel and jet fuel in the United States using just 12 percent of the waste byproducts in the country.â€

And if that wasnâ€™t enough, the sole byproduct from the crude-making process is fertilizer: 737-grade, all organic fertilizer.

â€œThe fertilizer is worth about 15 cents per pound, but the fuel byproduct is worth much more,â€ said General Manager Gerald Brent.

Sustainable Power currently houses five of these Vetroleum-producing reactors within its Baytown facility, the largest of which is capable of continuous output in just under nine minutes of operation. In addition to the central reactor, the company has also built four much smaller reactors that can be delivered to potential investors in order to both assuage doubts and test the viability of local farm wastes.

The eventual goal, Brent said, is the construction of 400 reactors at the Baytown facility â€“ each capable of producing 6,000 gallons of bio-crude a day â€“ and a (Vetroleum-powered) 500 megawatt energy plant capable of servicing 400,000 homes.

Brent expects the facility to be ready within the next 12 to 18 months. â€œWe have to build this from the ground up. This is just our proof-of-concept,â€ he said.

Powerful stuff… Always makes me think about a friend of mine…

10 Things You Need to Know About WordPress 2.6

Something to look forward to.

Well, this might make Flash files a little more useful…